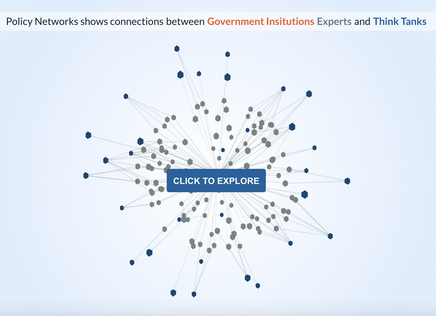 The Knowledge Production Project (KPP) is a dynamic, open-access archive, search tool, and data visualization platform. This project, more than a decade in the making, endeavors to gather, organize, and make available for analysis all knowledge produced on the Middle East since 1979.

Understanding that the production of and access to knowledge is never an impartial or equitable process, the Knowledge Production Project was founded to create new capacities for identifying and redressing these disparities. The KPP platform seeks to achieve this through three components: a searchable archive and data visualization of 150,000+ records of academic, policy, and audio-visual production about the Middle East, a Think Tanks Explorer which allows users to compare financial information and publication records across institutions, and an immersive Policy Networks data visualization which illustrates how power circulates within relatively confined networks by portraying the movement of individual experts to and from think tank and government positions.

P E E R - R E V I E W E D  A R T I C L E S
The objective of the Peer-Reviewed Articles Database (PRAD) is to gather and catalogue all peer-reviewed articles published on topics that relate to the Middle East from 1979 to the present. This database allows researchers to track the knowledge produced and consumed by academic knowledge producers.

B O O K S
The Books Database (BD) catalogues all books on the Middle East published in English from 1979 to the present.
​
Sources: The Books Database currently draws its listings from the British Library and the Library of Congress databases as well as well-known academic publishers and open-access web searches.

T R A N S L A T E D  B O O K S
The Translated Books Database (TBD) is an aggregation of records of books translated from Arabic into English from 1979 to the present.

Sources: The data for this database has been sourced from two principal databases: UNESCO’s Index Translationum (IT), a self-described “international bibliography of translations,” and the University of Rochester’s Three percent website, an annual list of books translated and published in the United States.

Sources:​ They include think tank websites, the United States Government Publishing Office, and IRS Form 990s, the forms used for nonprofit, tax-exempt organizations.
​
ONLINE SOURCES
The objective of the Middle East in Cyberspace Database (MECS) is to collect and categorize websites and blogs producing knowledge on the MENA region. Its ultimate purpose is to provide a framework for systematically understanding the conversation about the region occurring over the Internet. The Middle East in Cyberspace database is a catalogue of every website that produces knowledge written in English on the Middle East and North Africa since the 1990s. Since the Internet has no readily available systematic record or archive, the MECS team has used various informal sources and methods to identify websites that meet database criteria, including, but not limited to: blogrolls, word of mouth, extensive research using search engines, aggregates, and media outlets.
​
F I L M S  /  D O C U M E N T A R I E S  /  T E L E V I S I O N
The objective of the Films, Documentaries, and Television Database (FDTD) is to catalogue works (i.e., fictional feature films, television shows, and documentaries) that feature some kind of narrative on the Arab and/or Muslim worlds from 1979 to the present and that are funded or co-funded by Western production companies. The database’s main sources are open-source listings focusing on films, documentaries, and television shows (including serials) that feature the Arab and/or Muslim worlds in some capacity. Database listings are data mined from web-based searches that include journals, newspapers, film festivals, and reviews searches. Works are also gleaned from scholarship on the topic.
​
BOOK R E V I E W S
The Book Reviews Database (BRD) seeks to catalogue all book reviews pertaining to the Middle East published in peer-reviewed journals from 1979 to the present.
​
Sources: Book reviews are mined from a growing list of over 150 peer-reviewed journals.These include 1). journals that focus primarily on the Middle East;  2). journals that focus on a major theme strongly associated with the Middle East;  and 3). disciplinary journals, or journals without a specific focus on the region that occasionally publish relevant articles.
​
D I S S E R T A T I O N S
The objective of the Dissertations Database is to catalogue all English-language doctoral dissertations on subject matter related to the Middle East or the field of Middle East Studies from 1979 to the present. The database’s main source is the ProQuest archive, which allows data on dissertations to be downloaded from the website en masse. The database team has supplemented this archive with individual entries that have been referenced by our supporting network of scholars.
SEARCH FILES PODCAST: Knowledge Production and Pedagogy on the Middle East

Search Files covers trends in knowledge production and pedagogy. The hosts will hold monthly conversations with analysts and educators/faculty from industry and academia. 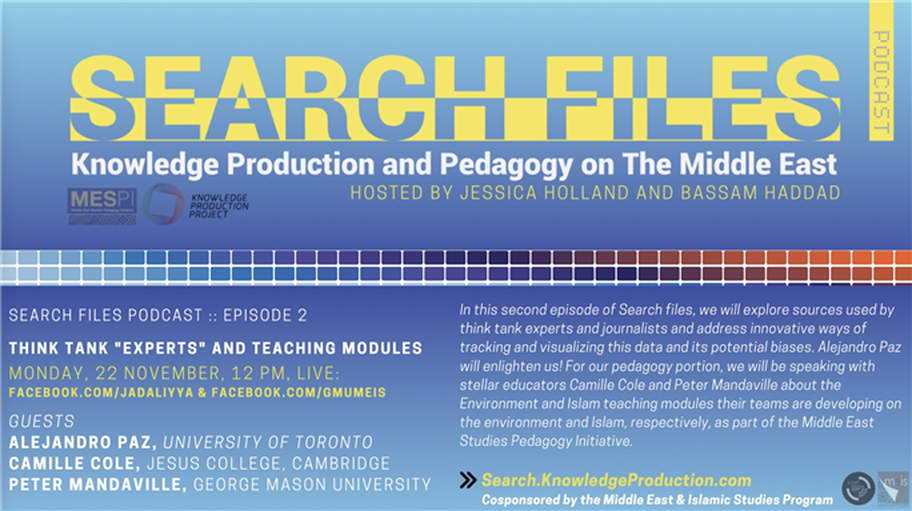